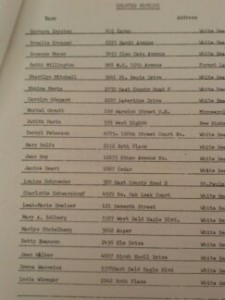 List of charter members typed on a manual typewriter

The Minnesota Division AAUW approved the application of the White Bear Lake Area, Minnesota, Branch on Nov. 1, 1976. The branch held its first meeting eight days later on Nov. 8, 1976, and approved its first set of bylaws Dec. 7, 1976. 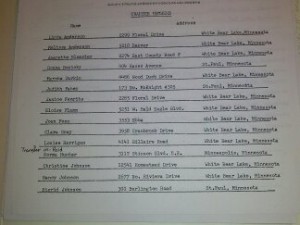 Another page of membership names.

During the 1977-79 biennium, branch study topics included redefining the goals of education, women as agents of change and the politics of food. Branch study topics for 1979-81 included families facing change and managing resources for tomorrow. The 1977-78 program year began with a potluck in September. Membership stood at 83 for the 1979-80 year.

Providing scholarships to students graduating from Century College, previously known as Lakewood Community college, has been an important component of the AAUW Northeast Metro (MN) Branch history. We began giving annual scholarships in 1979 to women graduates who were continuing their education at a four-year college to attain a higher degree. We felt this supported our community while supporting the AAUW philosophy of continuing education throughout the life span. In the beginning, we managed the selection of the recipients ourselves from a list of candidates provided by the college including potential recipients’ background information.  As the decades progressed and the process became more complex the Century Foundation was created by the college to manage scholarship funds. For many years they have provided us annually with candidates they have screened. As of 2020 our members are still involved in selecting the final candidates. We believe there have been over 42 recipients to our scholarships. Funds awarded to recipients directly related to our members total over $25,000.

Two documents, pictured here, have been found in our files indicating past recipients of our scholarships. If you would like to know about more recent recipients and read their stories, go to our web pages selecting from the subject bar ABOUT, then SCHOLARSHIPS … 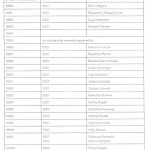 The above record is believed to have been created by deceased member Caroline Odegard, a charter member and branch historian. 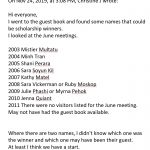 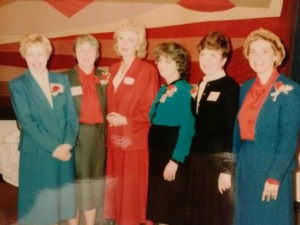 The new branch attained a 38% increase in membership during 1979-80, the largest percentage increase in the state. It jumped from 70 to 83 members, fueled partially by increasing population growth in the northern and eastern St. Paul suburbs.  A children’s film fest and a Christmas lunch auction at Kozlak’s Royal Oak restaurant produced $1,540 in income that year. The branch held an open house tea for prospective members in May. 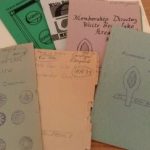 A branch survey that year showed that 66% of members were employed outside the home, 73% of them in the area of their degree.

By 1984, the branch had obtained a Topic Implementation Grant to fund a pilot program to integrate the use of home/personal computers into branch applications. It used an Apple II computer to conduct a networking project with Lakewood Community College to create a new career resource skills database. This became an Information Interchange with an AAUW Educational Foundation Programs (EFP)-funded Apple computer housed in the St. Paul AAUW clubhouse. The White Bear Lake Branch protested housing the computer there to no avail. That year the branch held a retreat during the first weekend of October. 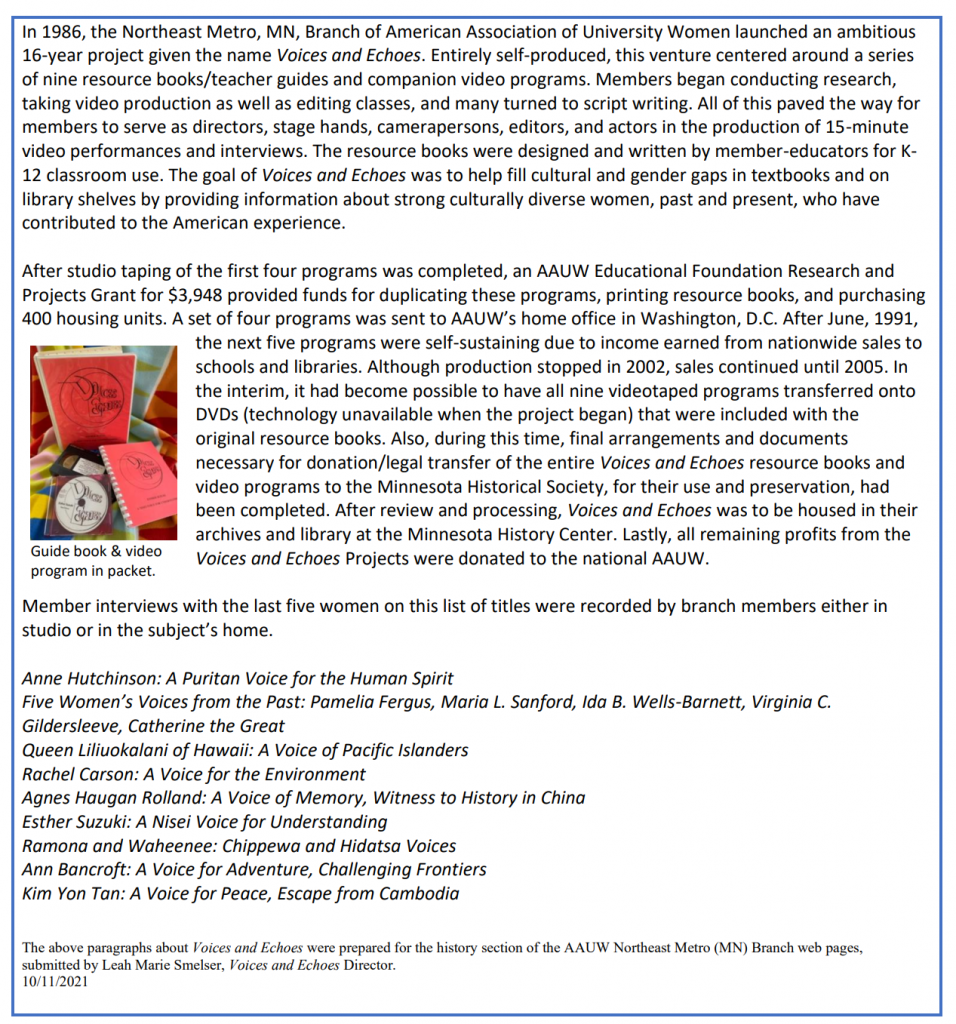 During 1986 the branch met in Minnesota Federal clubrooms. One of the interest groups was Investment Club. In May members participated in a Metrodome concession fundraiser during a Minnesota Twins Baseball game. 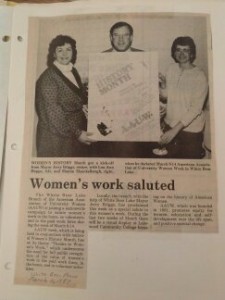 The branch celebrated its ten-year anniversary on Jan. 13, 1987 and changed its name to Northeast Metro Branch Minnesota. That spring members held a garage sale.

The branch commemorated Women’s History Week 1988 with a presentation, “Women: The Power of Positive Perceptions,” a series of biographical vignettes of significant American women.

In March 1990 the videotape, “Women Who Count,” was shown for Women’s History Week.

* Designates photos above which are courtesy of the Minnesota History Center 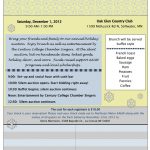 A Holiday Brunch and Auction for members and guests was the primary fundraiser for the branch from 1984 through 2017. An auctioneer supporting our organization volunteered to conduct the auction for many years. Eventually the event changed to be a silent auction. Branch members managed the event with a volunteer being chairperson. A custom flier to advertise the event was created each year by different members. An example flier used for advertising is shown to the left. It took place after Thanksgiving at a local restaurant or country club. Proceeds went to programs and our branch scholarship recipients. It was a hard decision to stop the fun event but we no longer had sufficient membership to manage it.

Below is a collage created for our January newsletter of the 2016 Holiday Auction Brunch showing moments captured at the event. 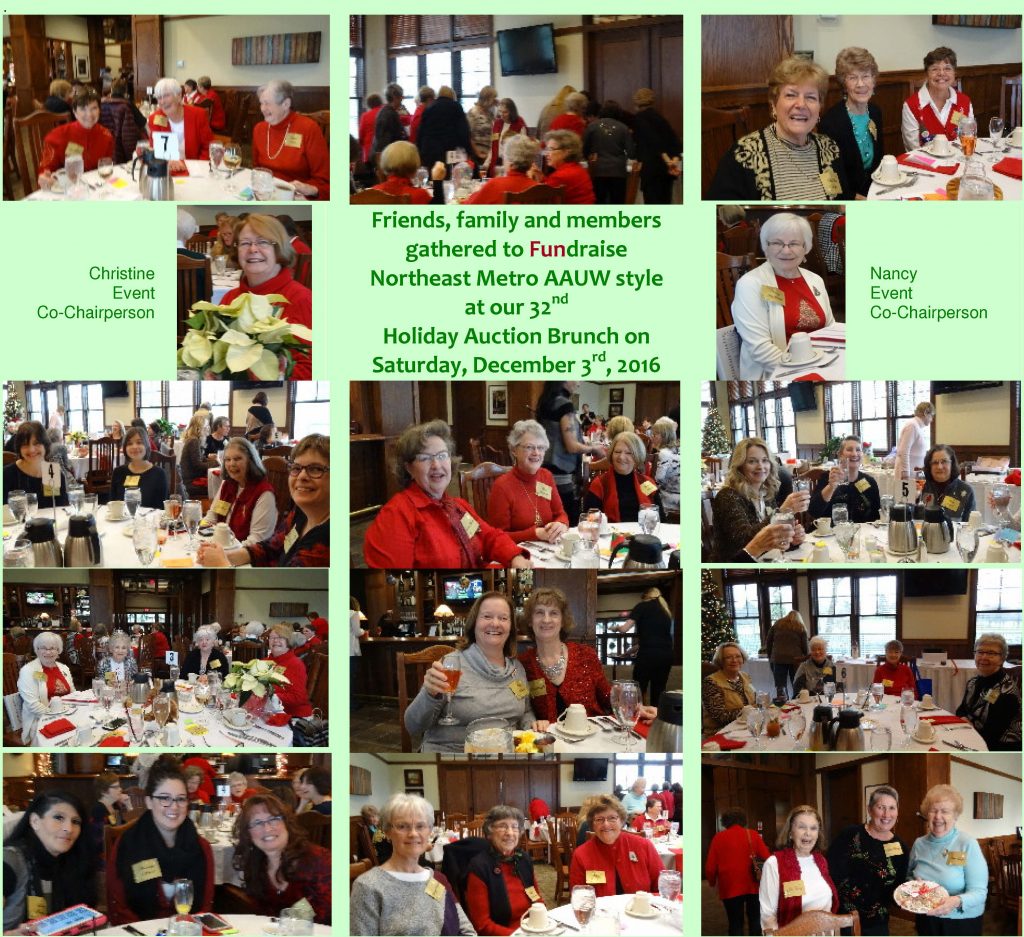 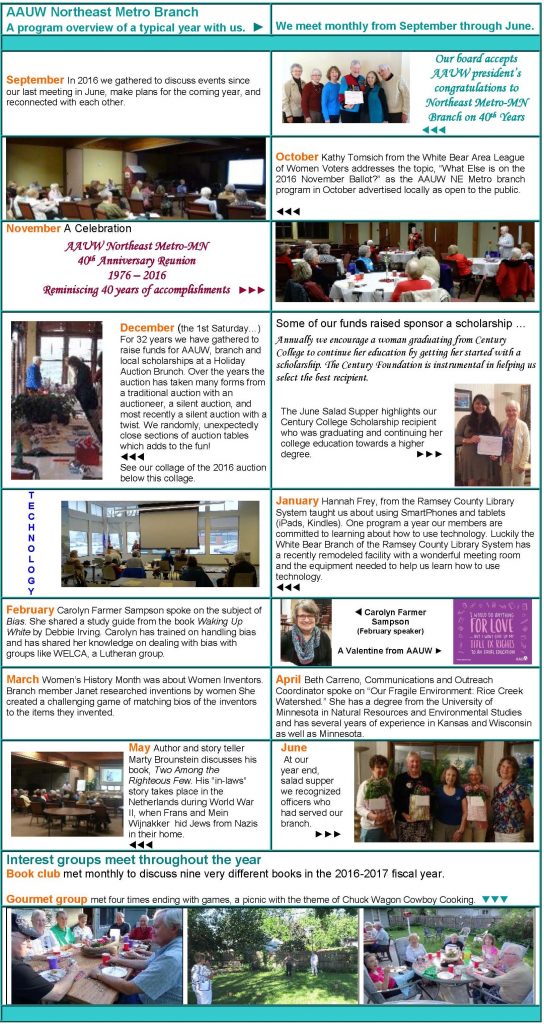 We moved the above program collage from our HOME page to our branch history recognizing the restructuring of our branch in 2019. Membership had declined to 15 members. With the support of the national level of AAUW, in 2019, we redefined ourselves and renewed our goals with a focus of helping members stay connected with AAUW and each other. We are now an all-volunteer branch with members volunteering annually to take the roles of Administrator, Financial Officer and Record Keeper required by AAUW and the IRS. We added the needed role of Communications Liaison to help us stay connected. The volunteers taking these roles are ratified by the branch annually. We have streamlined from nine monthly to four business meetings a year in which minutes are recorded. Casual Gatherings are planned by volunteers in months without business meetings. In 2020 – 2021, during COVID 19 pandemic many gatherings took place using the communications app of Zoom allowing us to video conference with each other from our homes. We received a grant from AAUW-MN to cover the cost of membership to Zoom for one year. 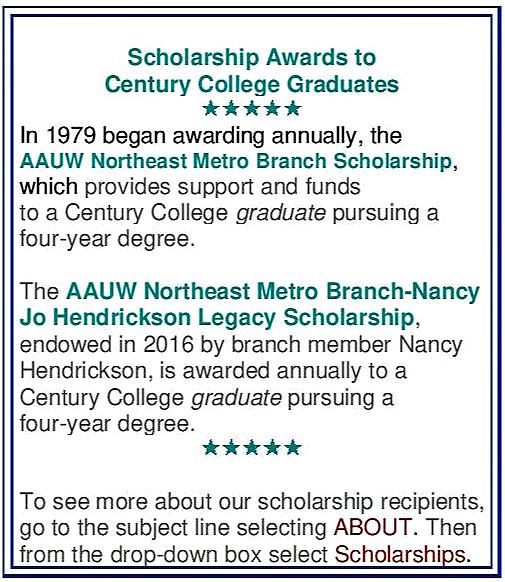